In April we met at the beautiful London School of Hygiene and Tropical Medicine for a day of respiratory epidemiology and research. We were very grateful for the central location, the high quality of the lecture content, the spacious lecture theatre, the nutritious lunch and the proximity to Store Street Espresso.

Interesting facts about the LSHTM:

Dr Jennifer Quint did a fantastic job organising and presenting an interesting and highly interactive day. She challenged us all to critically analyse every paper we read, and never to accept what is written in the abstract. She highlighted that a high impact journal does not guarantee high quality research and encouraged us to always have a critical eye (although not to always be critical!). Below is a summary of some of the content, although much of the learning came from small group and large group discussion of a number of papers, which is not captured here. If you weren’t there, you missed out!

What is the research question?

We began with an introduction to epidemiology, refreshing our memories of some of the key concepts. We were reminded of the need to be cautious in attributing causality when considering an exposure and outcome. We revisited the hierarchy of evidence, but were reminded that RCTs are not possible in many situations. Observational data have historically contributed significantly to our knowledge and led to huge changes in both public health policy and clinical practice.

When considering the quality of observational studies the Bradford Hill criteria are helpful. They are a group of minimal conditions necessary to provide adequate evidence of a causal relationship between an incidence and a possible consequence, established by the English epidemiologist Sir Austin Bradford Hill (1897–1991) in 1965. It is not possible to do RCTs in all cases and observational data can provide strong suspicion of causality. However, it cannot prove it, and the possibility that the study is flawed, must always be considered.

We considered different research questions, and tried to identify the question in a number of published papers – not always as easy as it sounds. We used the PICO structure to help us:

Why not try some of the examples yourself? 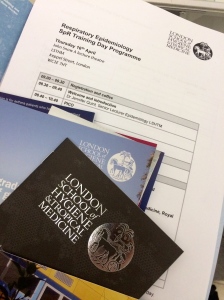 Determining study design is not always as straightforward as you might think, as we learned by looking at a number of abstracts from high impact journals.

Bias is: a systematic error in the design, conduct or analysis of a study that results in an incorrect estimate of an exposure’s effect on the risk of disease. Bias leads to a result which does not represent the truth.

There are many different types of bias. Examples include:

An important type of bias in epidemiological studies is immortal time bias, explained in ‘The Secret of Immortal Time Bias in Epidemiological Studies’ by Shariff S Z et al JASM 2008;19:841-843 using an example of a retrospective cohort study of multidisciplinary clinic in CKD. Some key diagrams in the paper are very useful and demonstrate the value of drawing out the cohort to understand how the study was conducted, and therefore where bias could arise. 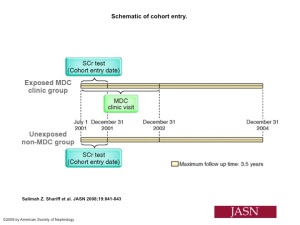 The Kaplan-Meier survival curve shows that the cohorts in this study diverge from start. This seems strange as it is difficult to explain how this intervention could lead to an immediate survival difference.

The answer is immortal time bias as serum creatinine was measured at different times in each cohort. If this is known then researchers can match on time in analysis to account for this.

Another source of bias is missing data. A paper by Collier et al examining renal registries is helpful in understanding this.

There are ways of dealing with missing data. Statistical techniques such as multiple imputation analysis can help to reassure that the missing data has not skewed the results.  All large registries have incomplete data and understanding the implications is important. In the case of Respiratory medicine, spirometry readings are often missing from EHRs. It is not possible to impute readings as there are many possible reasons for missing data e.g. GP surgeries why do/don’t do spiro, why some pts do/don’t, decline in FEV1 not predictable for individual.

An important message was to always look for potential sources of bias, at all stages of trial design, conduct and analysis. It is possible to correct for some types of bias, but only if the research team identify them.

We took a break from research and epidemiology to hear from Dr Rama Vancheeswaran (Consultant at Barnet) about the results of the National Review of Asthma Deaths. We looked at a ranking of mortality in asthma of 5-34yr olds by country and were perhaps surprised to see the hierarchy: iceland does well, kazakhstan does badly, but England is in the middle. Some reasons suggested for this was that Sweden etc step up steroids fastidiously. They may over-treat, but one view is that this is acceptable as it is better than under treatment.

NRAD is a multiple route cause analysis, which was originally triggered by the case of a boy dying at school of an asthma attack before getting to hospital. It includes an examination of hours before death (A&E care, location of death, environmental factors), months before death (medication, patient compliance etc) and a longterm history of asthma care. It has real impact, with 132 doctors and nurses referred to GMC/NMC as result of the initial review! Results showed

We discussed possible ways to identify patients at risk of death:

1. Go through A&E lists and find asthma patients
2. Empower patients – leaflet with key advice
3. Asthma nurse in A&E
4. Collaborate with A&E dept
5. Use of pharmacists for education and medication checks – how many inhalers used?

Some important key facts were highlighted. A Ventolin inhaler contains 200 puffs. Each puff is 100mcg. Good control is defined as using a ventolin inhaler <2/wk. There is excessive prescribing of ventolin inhalers. 6 patients in the review were prescribed 50 inhalers in a year!
There is also still inappropriate prescribing of isolated LABA – this delays presentation, with higher mortality. Patients MUST have steroids too. 26% of those who died had psychosocial factors identified, and 16% mental health issues.

We were advised to give SMART regime for noncompliant patients, as a safer strategy, as it provides the steroids they need. We were also advised to encourage the use of combination inhalers in our primary care colleagues.

Members of the audience also pointed out the importance of non-drug interventions, particularly stop smoking support.

As we all know, asthma is more complex in practice than guidelines sometimes suggest. We were pointed towards Haldar et al AJRCCM 2008; 178:218-24  which suggests phenotype-specific treatments. This sort of analysis helps us to understand treatment failures and consider alternative strategies. We were reminded to consider the effects of resp physiology/compliance, systemic inflammation, and reflux, particularly in obese patients.

Looking to the future, anti IL-5 is in trials and we await the results with interest.

The overall message to us wasL KISS Keep It Simple Stupid. We were encouraged to get the basics right, and consider how they could be better delivered consistently in our local services. The big 4 areas of focus to change outcomes were: adherence, cigarettes, allergens, psychology.

We returned to our examination of research and particularly epidemiology, and began the afternoon by considering confounding. Confounding is an alternative explanation for an observed association, and can occur at both the design and analysis stage.

There are several ways to deal with confounding, but importantly, you cannot adjust for a confounder if you have not measured it!
Multivariate modelling is a common strategy. Usually there is one main outcome, and multiple potential confounders. The important question is “is any association still ‘significant’ after adjusting for confounders?”. It is important to realise that a variable that adds significantly to the model may not be a confounder. e.g. cigarette lighter use and cigarette smoking. Also, a variable that does not ‘add significantly’ may be a confounder. As always in research, think clinically as well as statistically.

Is is essential to plan what you will adjust for BEFORE you start collecting data. DAGs – directed acyclic graphs can facilitate this. Residual confounding remains after you have unsuccessfully attempted to adjust for it. It may result from additional factors that you did not think of, or as a consequence of your adjustment for confounding not being tight enough (e.g. young vs old rather than age brackets).

At the end of the afternoon three trainees at the end of their period of OOPR presented some of their findings and provided tips on organising and surviving research. You can see these in the post ‘spotlight on research‘ and further information on the research page. Congratulations to Dr Ian Stone who won the coveted RespNET research prize!

We look forward to both the epidemiology day, and the research prize, becoming an annual event.